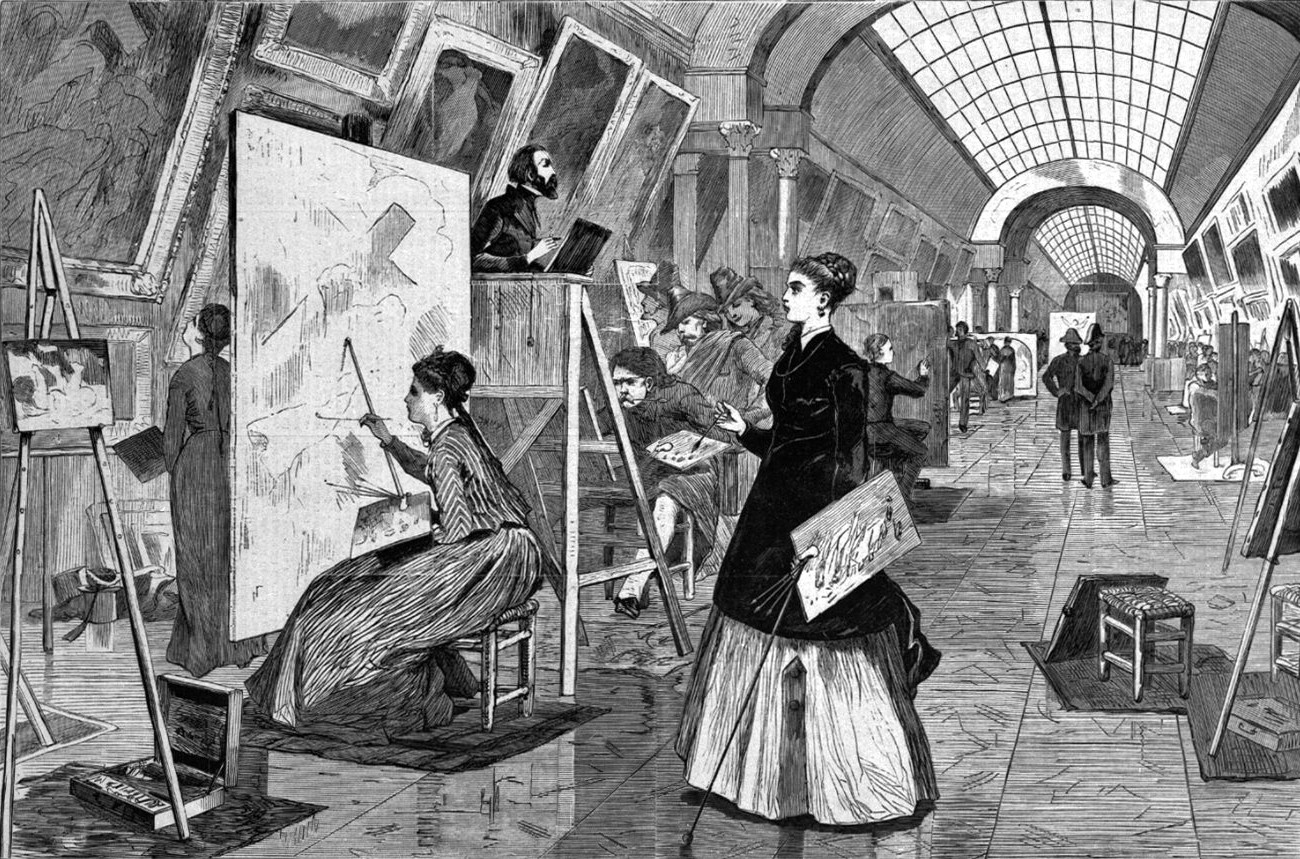 Winslow Homer* – Art-Students and Copyists in the Louvre Gallery, Paris

Back in the day, if you were a student at the École des Beaux-Arts, a significant part of your artistic education would have involved plonking your easel in front of an old master painting and carefully copying it. There are plenty of reasons why this was a good idea and one or two why it was not.

The 19th century was a strange place, devoid of digital communications, where it was almost impossible to get a decent latte. Reproductions of fine paintings were engravings or chromolithographs, which carried nothing of the handling of the paint and the colours tended to be a bit approximate. So if you were lucky, it was off to the Louvre where they had days put aside for artists to copy from the old masters.

Some of us will remember that historically a lot of learning was by wrote, there was a correct way of doing things, so copying others who new better was good practice. And art appears to be a continuum, what we produce now is inevitably, if only partially, a consequence of what has gone before.

If you have tried to learn how to paint or draw you may have discovered that there is quite a lot of ground to cover. You can read books, watch videos, talk to artists, take art courses and always draw and paint ceaselessly. But there is also a place for copying the work of another painter. When we copy, new circuits are set up which transcend the usual commerce of mind, following in the strokes of another, placing colour in the way that they do, we can learn the subtle charisma of their work without really being conscious of how.

There is the argument that this form of slavish copying, which was important to academic artists, stifled creativity and lead to mediocrity. If all one did was copy, this would hold water but as part of a portfolio of learning exercises it can inspire and stimulate us whilst we get to grips with the plastic qualities of our medium.

Portrait artist Alex Tzavaras has made master copies and in his latest Youtube video he paints a portrait using what he has learned about Sargent’s technique, both from copying and from contemporary accounts. Worth watching. Alex will be accepting new students onto his portraiture course in September.

Artist Clare Haward often includes copying in her practice and her teaching. She has an exhibition this week at the 155A Gallery in East Dulwich from the 6th – 17th July – you can read more and sign up for the private view here

*Winslow Homer was a pretty good artist, the engraving above was an example of his commercial work but he is probably better known as a marine artist.